Its not trendy to have PTSD 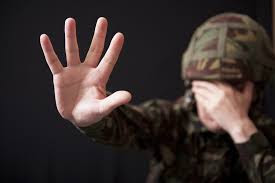 There has been some positives in the attitude of people towards ex military suffering from mental health issues such as PTSD (Post Traumatic Stress Disorder ) and that should be welcomed but obviously we cannot be complacent and warm words cannot fix everything but they help. Going back 15 to 20 years things were very different, when I spoke publicly to the press and TV and radio, I received a  relatively small but equally upsetting amount of abusive e-mails from people claiming to be serving and ex military, even one from a serving Metropolitan police officer who if I had chose to do so and reported him could have found himself in serious trouble. The ignorance of their statements , more drunken rants was evident when they called me such things as `Coward` and `Traitor`, amongst other things, which could not be further from the truth as anyone who knows me will tell you that I fought for my Country in the Falklands War and Northern Ireland with bravery and distinction, its seems they did not get the `Post` bit? So yes we have had improvements in the diagnosis and treatment of PTSD, but the suicides from recent Wars are still extremely high and not something that the MOD and our political masters really want to discuss out in the open as this can have a detrimental  effect when it comes to recruitment. What I find disturbing is the increasing amount of veterans that may have medals but have never seen any military action now claiming to be suffering from PTSD. I completely understand that it is possible to have PTSD from a variety of incidents that have nothing to do with the military, however  I firmly believe that due to the public sea change towards our military at the moment its seems almost `trendy` to be suffering from PTSD. Genuine sufferers find this extremely upsetting, the same as a cancer suffer would find it offensive for a person to falsely claim they had cancer. I have no problem with, I welcome veterans to raise awareness about PTSD, but please do not insult our intelligence by making false claims, this actually makes genuine sufferers even worse.