Falklanders would have BETTER lives under Argentina's rule' says minister 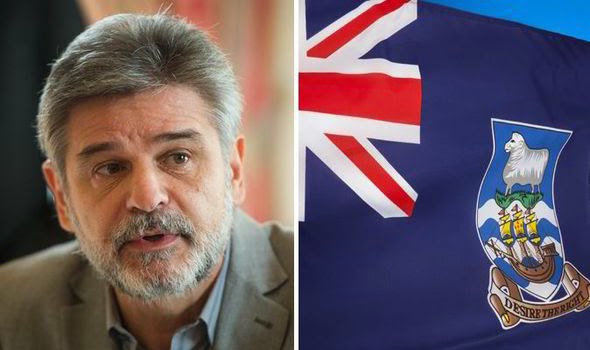 The claims come as Buenos Aires ramped up threats to lock up British oil executives who continue to explore for hydrocarbons around the islands.

But angry islanders rejected the boasts as ludicrous, with one suggesting Argentina just wanted Falkland revenues to help “plug up its debts”.

Speaking to the Sunday Express last night, Daniel Filmus, the South American country’s “Malvinas” secretary, and Argentina’s ambassador to London, Alicia Castro declared that islanders would live a “stress free” existence if only they accepted rule by Buenos Aires.

“We have no problem with the inhabitants of the Falklands; they are British and would have the right to remain British under Argentina administration,” said Secretary Filmus, during a visit to London.

“We are convinced that they would have everything to gain, even oil, if dialogue on this issue starts again.”

Ambassador Castro, whose official Belgravia residence boasts several pictures of her with Venezuela’s former socialist ruler Hugo Chavez, added: “The islanders are assigned a governor who is appointed in London and sent there, just like in colonial times.

“From the day that Argentina is allowed to exercise its sovereignty, they will be able to democratically choose their own authority. “

Asked whether Argentina recognised that the islands had a democratically-elected Legislative Assembly, Secretary Filmus replied: “We don’t recognise the MLA. It is illegitimate and their laws need to be approved by the Governor. We have a democracy.”

In fact, the eight-member assembly has powers to propose Bills or debates for the "the peace, order and good government” of the islands and only need the Governor’s permission when proposals affect taxes or finances.

Asked how much oil revenue the islanders would be allowed to keep, Mrs. Castro said under Argentina rule the islands may become part of one of the country’s 23 federal provinces, though this would only be worked out after bilateral discussions.

She added: "The islanders will be able to explore and exploit natural resources as any other Argentine province or state does, and enjoy the important revenues without being clandestine, as is happening now, because they are clearly on Argentina’s continental shelf.

“They will be able to use our free universities, our hospitals, and have a proper link with the continent and the world.” Read more HERE


(RG) That is like Adolf Hitler saying that Jews would have a better life under NAZI rule.