Falklands veteran dying of cancer told: You have to work again 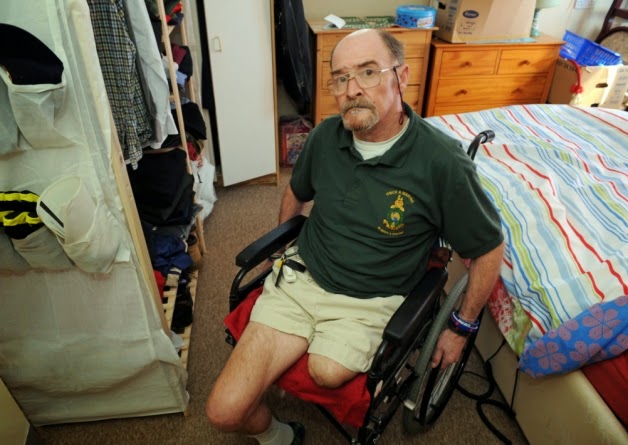 FORMER commando Gordon Lang has been told he should get back to work – despite having terminal cancer.

Amputee Gordon, 62, was already in dispute with the Department for Work and Pensions (DWP) after they forced the Falklands and Northern Ireland veteran to sign on to Jobseeker’s Allowance.

But the ex-marine was left feeling ‘betrayed’ after saying he told a government work programme about his cancer diagnosis, only to receive a response saying: ‘When you feel fit and ready for work we look forward to working with you to find a suitable job.’

Mr Lang, of Chilworth Grove, Gosport, was then told he will remain on a work programme – despite being about to undergo lung cancer treatment that may only add three months to his life.

Mr Lang, who has not been told how long he has to live, said: ‘I feel not only betrayed but criminalised for being ill.Read more  HERE

I am extremely angry and upset reading this. Look how the British government treats its ex servicemen. I’m sure if they could get away with it, they would gas them like the NAZIS did to millions of human beings. You see the coalition Government do not see people like Gordon or myself as human beings, they just see us as a piece of equipment that is now obsolete and a drain on society, however, the tens of thousands of immigrants poring into the UK, are treated like Royalty and given houses some worth over a million pounds, eastern European families with ten or more children are given thousands each week in benefits. Ian Duncan Smith should be tried at the Hague, for crimes against humanity.
Posted by Tony McNally at 01:00