Falkland Islands given medal for showing 'indomitable will' during Argentine invasion 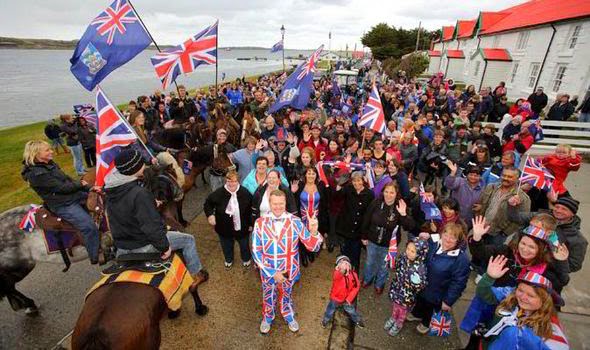 THE Falkland Islands has collectively been awarded a medal today in recognition of their 'indomitable will' during the Argentine invasion.The archipelago were today honoured for the "personal commitment" they showed in defending their right of self-determination during the 1982 war. The South Atlantic medal was handed to almost 30,000 troops and civilians who served in the operation to liberate the Falklands from Argentine forces. Foreign Secretary Philip Hammond said: "I am pleased to inform the House that in 2015 the South Atlantic Medal will be presented, on behalf of Her Majesty The Queen, to the Falkland Islands, in recognition of the assistance provided to the Forces of the United Kingdom during the liberation of the Islands in 1982. "The Islanders' individual acts of courage exemplified the indomitable will and personal commitment to defending the Islands' right of self determination." Prime Minister David Cameron will honour the people of the Falklands Islands during his annual Christmas message to them.Read More HERE

(RG) Some people will be happy with this award, some particularly those that hate the Tories will say Cameron is using it for his political means leading up to a General Election. I like many are extremely disillusioned with politics in the UK, but I think this award is a good thing, the Islanders deserve this award. I also think a medal should be awarded to all servicemen that have served their Country, particularly in the cold War era, like the awards the Australian military get, but that’s another story. I sure the Argentine Government will have a moan about this but that’s nothing new.
Posted by Tony McNally at 16:13