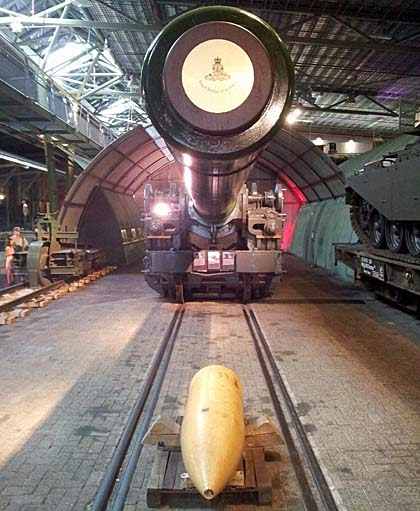 The mighty British 18-inch Railway Howitzer is the world’s largest surviving military gun and weighs about the same as 17 double-decker buses. It is so large that during its transit and delivery it had to be split into two sections, gun and carriage. After weeks of careful planning and a journey that included negotiating the M25 Dartford Crossing, the gun is now sitting on a specially-installed railway track in preparation for it being loaded into the museum’s artillery hall. Here it will take centre stage for the centenary commemorations of the First World War between 2014 and 2018. Developed during the First World War, the Howitzer was produced as part of the trend to build bigger calibre guns capable of firing heavier, more destructive shells in the battle to break the stalemate on the Western Front. Each 18-inch shell weighed about a ton. The First World War ended before any 18-inch Howitzers were ready, but five were completed soon afterwards. Some of them were used for testing purposes on artillery ranges and one had a new lease of life in the Second World War – serving on a railway line in Kent, in readiness to blast the beaches if a German invasion force landed. Luckily the Howitzer was never fired in anger as the feared invasion never occurred. The Howitzer is on loan from the Royal Artillery Historical Trust and joins “historical heavyweights” at the Royal Armouries Museum, near Fareham – home to the big guns. It has previously formed the centrepiece of an exhibition at the Het Spoorwegmuseum (Dutch Railway Museum) in Utrecht. Read more HERE

UBIQUE
Posted by Tony McNally at 19:39