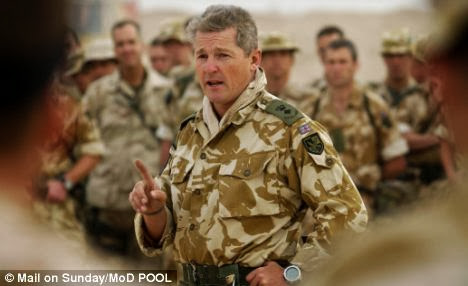 Spending a night on the streets for a Panorama documentary brought a new challenge for Colonel Tim Collins, whose eve-of-battle speech inspired the nation before the Iraq War. Now he must rally former comrades facing a very different threat  -  drink, drugs and homelessness...
I was dressed for the occasion: my old army boots, an Arran jumper and a battered leather jacket. I was permitted a sleeping bag, a warm hat and £3.
After a ham sandwich and a cup of tea provided by a church charity, I bedded down on discarded cardboard in the doorway of a former electrical shop.
My companion was Mark, an ex-soldier who had descended into crime, alcoholism and homelessness after a narrow escape from the Omagh bomb. Mark has now turned his life around, but he agreed to return to the streets for one night to show me what homelessness was like.Read more HERE

The Article says it all, the drunken idiot doesn't know how lucky he was that night.