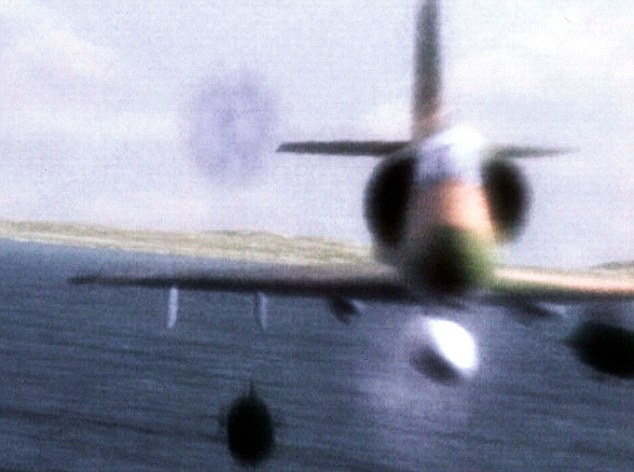 Britain sent a laser weapon to the Falklands to 'dazzle' low-flying Argentine pilots as they attacked Royal Navy ships, secret government papers revealed today.
The secret device was developed quickly and secretly but was never used in action during the 1982 conflict.
Its existence was revealed a year later to Margaret Thatcher in a January 1983 letter, marked 'Top Secret and UK Eyes A,' from Michael Heseltine.Mr Heseltine wrote: 'We developed and deployed with very great urgency a naval laser weapon, designed to dazzle low flying Argentine pilots attacking ships, to the Task Force in the South Atlantic. This weapon was not used in action and knowledge of it has been kept to a very restricted level.'
His briefing on military capabilities also touches on the laser weapon research and development programmes called Raker and Shingle which were 'proceeding at high priority,' according to the papers.
He claims the Soviet Union could field laser weapons by the mid-1980s but it was uncertain whether owning such offensive laser weapons was useful.
By the end of 1979 British interests were in using medium power laser directed against relatively softer targets such as eyes, optic and electro-optic sensors.
His note said: 'the Russians could be in a position to field such weapons by the mid-1980s (in fact, the Russians may already have deployed a laser weapon on the cruiser Kirov)'. Read More  HERE