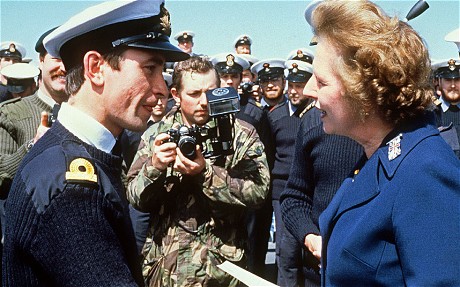 Margaret Thatcher’s 1983 visit to the Falklands was akin to a military operation in its own right and followed six months of meticulous planning.The prime minister visited the islands for four days in January to mark the 150th anniversary of the establishment of a permanent British settlement.
The trip, less than eight months after the end of the conflict, had to be kept secret because of the “significant” threat from Argentina, confidential government files show.
The documents, released today by the National Archives under the new 20-year rule, include extensive briefings from the Ministry of Defence marked “Secret UK Eyes A” about travel arrangements.
The prime minister was flown by the RAF to Ascension Island before being taken on a Hercules plane, which had to be refuelled mid flight, to Port Stanley. The flights cost £209,867, an invoice from the MOD contained in the files shows.
Information about the visit was only shared with a handful of staff at Number 10 and press officers were briefed to tell the media that Mrs Thatcher was going to Chequers for the weekend. Read More  HERE

"LOVE HER OR HATE HER MAGGIE HAD MORE BALLS THAN ALL OF THE WISHY WASHY POLITICIANS WE SADLY HAVE TO PUT UP WITH TODAY."
Posted by Tony McNally at 07:30