BATTLE OF DARWIN AND GOOSE GREEN 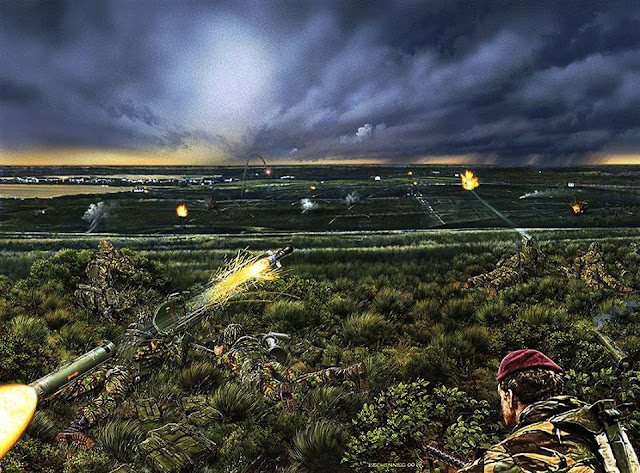 Goose Green and its neighbour Darwin are settlements on East Falkland in the Falkland Islands. They lie on Choiseul Sound on the east side of the island's central isthmus. They are about 13 miles south of the site of the major British amphibious landings in San Carlos Water (Operation Sutton). 17 British soldiers lost their lives in the battle and another 64 were wounded. Picture: Battle for Goose Green by Daniel Bechennec See following posts for photographs The bulk of the Argentine forces were in positions around Port Stanley about 50 miles (80 km) to the east of San Carlos. The position at Goose Green and Darwin was well defended by a force of combined units totalling about 1,200 (at the start of the battle the number was thought by the British to be less than half this), well equipped with artillery, mortars, 35 mm cannon and machine guns. However the force was fairly static and judged to present little threat to the beachhead. Consequently it had no strategic military value for the British in their campaign to recapture the islands, so early plans for land operations had called for Goose Green to be isolated and bypassed. Things changed in the days following the landings on 21 May. While the bridgehead was being consolidated no offensive ground operations of any size were feasible and yet Argentine air attacks caused significant loss of and damage to British ships in the sea area around the landing grounds. This led to a feeling among senior commanders and politicians in the UK that the momentum of the campaign was being lost. As a result British Joint Headquarters in the UK came under increasing pressure from the British Government for an early ground offensive. And so, on the 25th May Brigadier Julian Thompson, ground forces commander, commanding 3 Commando Brigade was ordered to mount an attack on Argentine positions around Goose Green and Darwin. BBC incident During the planning of the assault of both Darwin and Goose Green, the Battalion Headquarters were listening in to the BBC World Service. The newsreader announced that the 2nd Battalion of the Parachute Regiment were poised and ready to assault Darwin and Goose Green, causing great confusion with the commanding officers of the battalion. Lieutenant Colonel Jones became furious with the level of incompetence and told BBC representative Robert Fox he was going to sue the BBC, Whitehall and the War Cabinet.

THE BBC IS A NATIONAL ANTI BRITISH DISGRACE.
Posted by Tony McNally at 20:00