"Cheap Flights To The Falklands Islands £45" 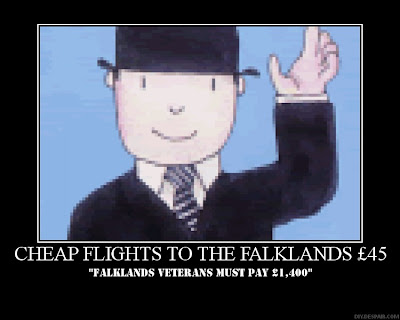 As some of you will know who regularly read my Blog, I have been extremely upset by the news that I was not picked by SAMA (82) to return to the Islands in November for the 25th anniversary pilgrimage. After a couple of days of depression I picked myself up and rang up RAF Brize Norton and asked how much it would cost if I were to pay myself to fly back with the RAF. There is a flight from Brize every five days to the Falklands and apparently some of the planes are half empty. I was shocked and stunned when I was told by a female that it would cost me £45, yes that’s right I said £45. I asked several times and she told me that was correct and gave me a telephone number to book the flight. I just could not believe it and immediately rang Eddy Denmark who I am going to return to the islands with eventually one way or another. We were both overjoyed at the news and Eddy rang up to book our flight. Like they say if something seems to good to be true it usually is and Eddy rang me back to tell me that he rang the number and was told the cost would be £1,400 each. We were both back to square one, I was very sad, but when Eddy told me that if were civil servants we could still go for £45. I was and am seething with rage at this Government. A civil servant who works in a tax office for arguments sake who has no connection to the military can if they want fly back to the Falklands for £45. Myself and Eddy who are Falklands veterans would have to stump up £1,400, that just is not right by anyone’s standards surely. I immediately emailed Derek Twigg the veterans minister once at the MOD and once at his constituency web site. He has not replied. I think this is a scandal and at least now due to my Blog the general public will know about it. I suppose I should not be that surprised at how veterans are treated in this country as the country myself and Eddy fought for in 1982 is gone forever. Myself and Eddy are both fighters and wont give up that’s why we are still alive. Several years ago I wrote to the Governor of the Falkland Islands and asked if I could move over there and work doing anything. I had just split up from my Wife after she had committed adultery as I baby sat my beautiful daughter. This was the nearest I had come to taking my own life and if it was not for my best mate Eddy I surely would have. Suffice to say in the Governors eyes I was not fit to clean their streets. I was rejected by the Islands I helped liberate. I have also contacted Falkland Islands companies about helping me go back this week, they also will not help and tell me to get in touch with SAMA. The Falkland Islanders always seem to be saying how grateful they are for us liberating them from the Fascist Argentineans but in my book proof is in actions not hollow words. I am sure there are many genuine Falkland Islanders who are genuinely grateful for what we did back in 82, but it seems the men who have profited the most from the War and who hold the purse strings are not. This is not me being bitter this is the reality and the truth. Well if there is any civil servants who fancy a cheap bird watching holiday in the South Atlantic get yourself down there for £45.


© Mack (RG) The thoughts of a Falklands War Veteran.
Posted by Tony McNally at 20:51