Why the MOD is not fit for purpose. 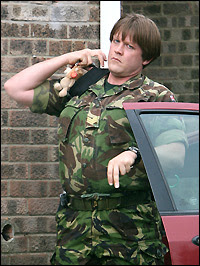 A BURLY Army sergeant is having a £30,000 sex change — paid for by the Ministry of Defence.
Rugby-playing former commando David Penny, 40, has changed his name to Deborah and wears false boobs under his uniform.
Off duty, the Royal Green Jackets bomb disposal unit veteran is allowed to totter around the mess in stilettos, a skirt and tight-fitting tops as he awaits his op.
And we can reveal his comrades are outraged — not so much by Penny's sex swap, but by the fact the ARMY is shelling out for it Read It Here

(RG) All I can say is thank fuck I’m not in this so called army today what a laughing stock we are becoming. Aside from that think of the body armour and other essential equipment the lads in Iraq could have used with the £30,000. In my opinion if David Penny wants his cock cutting off, then do it himself it’s a waste of tax payers money, or send him to Iraq I’m sure there is an Iraqui militant ready to do it for nothing.


© Mack (RG) The thoughts of a Falklands War Veteran.
Posted by Tony McNally at 13:25