Thousands of veterans have marked the 25th anniversary of the Falklands War. 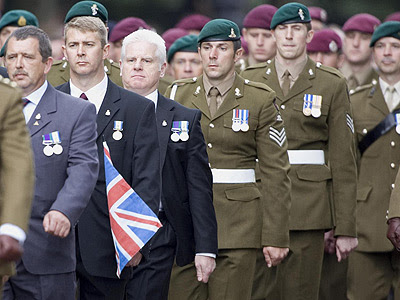 Vets march along Whitehall
At the same time a poignant service was held 8,000 miles away in the South Atlantic.
It was the first time identical tributes were made in the two places in such a way.
The commemoration service in Horse Guards Parade, Whitehall, focused on the human side of the conflict.
It highlighted the courage and sacrifices made by the service personnel involved, their families and the islanders.
At the same time a Drumhead Service of Remembrance was held in San Carlos Military Cemetery. Read It Here

(RG) I did not attend the parade as I had been in London on Wed & Thursday. As I have stated previously I am hoping to return to the Islands in November I am not really interested in parades and medals and pomp & curcumstance I just want to sit quitely at San Carlos and Fitzroy. Myself and my best mate and Falklands veteran Eddy Denmark have decided that if one of us is picked to go to the Falklands then the other one will not go,its together or not at all like it was in 82.
Posted by Tony McNally at 16:54