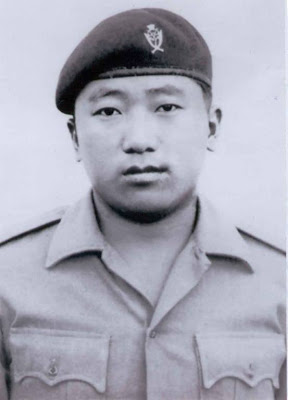 The humiliation of brave Gurkhas like Mr Pun VC and Lance Corporal Rai highlights our Government's shoddy treatment of all "our" honourable Gurkha-soldier veterans. You can continue to support our Gurkhas and Lance Corporal Rai by asking your friends to visit this website and by joining our campaign by writing to their MPs and the Government Minister for Immigration, Liam Byrne.
Gyanendra Rai has been told that he does not have "close ties" to the United Kingdom, and is not welcome in this country. What follows is an extract from Lance Corporal Rai's account, in his own words, of events at Bluff Cove in June 1982, and thereafter:-. Read The Rest Here

(RG) Its not hard to get angry at the way this Labour Government has treated the UK Armed Forces. But after reading about how the Gurkhas are not allowed into the UK after having served Britain in Wars like the Falklands has my blood pressure dangerously high. These brave men could try and make there way to France and then get into the UK and claim asylum but they are honourable brave men, with pride and would never think of doing anything underhand, they are everything that this Labour Government are not. I would like to apologise to these men and I feel ashamed of my Country they are the victims of discrimination. If you are an American reading this and you have watched the trooping of the colour at Buckingham Palace, realise that there are many many brave ex British soldiers that have been betrayed by the UK in a far of place called Nepal.
Posted by Tony McNally at 11:59