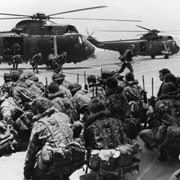 For all three services, the recapture of the Falklands was a proud victory.
Codenamed Operation Corporate, the dispatch of a task force carrying 28,000 personnel 8,000 miles to the other side of the world was unprecedented since D-Day.
To then fight and defeat a superior, well defended force established just a few hundred miles from home was an outstanding feat of arms.
But on this 25th anniversary, living on past glory is a luxury the military cannot afford. The forces have rarely faced so many problems.
Filling the ranks is a dilemma across all three services. It's caused by what recruiters term the "Mum factor".
Read It Here

(RG) Personally I think the “Labour factor” is more significant.


© Mack (RG) The thoughts of a Falklands War Veteran.
Posted by Tony McNally at 16:03